Last week we learned that, although women make up about 70% of the PR workforce, they hold only about 30% of the industry’s top positions, according to a study of 250 PR firms by The Holmes Report.

Here are a few more highlights:

Looking at the top 10 PR firms, the study found women in leadership positions at high rates:

The only notable exception is Ogilvy—where none of its four top leadership positions are occupied by women.

Following are a few possible explanations for this gender gap in public relations firm’s C-Suites.

1. The strategies that work for men don’t work for women.

A study by Catalyst, The Myth of the Ideal Worker: Does Doing All the Right Things Really Get Women Ahead? compared career advancement strategies used by women and men to determine if using the same strategies led to the same career outcomes and found that:

The rules are different for an act as simple as talking. A 2012 study from Yale University (http://asq.sagepub.com/content/56/4/622.short) found that the total time spent talking positively affected men but not women. For example, when a man speaks up he’s considered powerful, but women are often criticized for speaking more than others.

2. Women appear to lose their aspiration and confidence after two years.

A five-year study by Bain and Company (http://www.bain.com/publications/articles/everyday-moments-of-truth.aspx) revealed that 43% of women aspire to top management positions in their first two years of work, compared to only 34% of men.

However, over time, women’s aspiration levels drop by more than 60% while men’s stayed the same. After two years, 34% of men still aspire to executive position while only 16% of women do. Correspondingly, females’ agreement with the statement “Have the confidence to reach top management” dropped from 27% to 13% after two years, while men’s agreement with this statement dropped by only 3%.

3. Women are less likely to ask for a promotion.

A PRWeek poll conducted in March 2015 asked female readers if they would be willing to ask for a promotion. Of the 289 respondents, more than 25% said they were either “not very willing” to ask or would rather set up their own company.

4. Women’s approach to leadership can work against them.

A 2014 study by VMA Group (http://www.vmagroup.com/news_and_community/events/view.php?id=12343) revealed that women tend to focus on relationships while men tend to put their energy into demonstrating results of their work. Further, women don’t call as much attention to their own achievements and are more likely to encounter backlash when they do.

5.  Sexism still exists in the workplace.

The results of a 2014 Pew Research Center survey released in January 2015 reveal that 43% of respondents said women in top executive positions are held to higher standards than men. Pew surveyed 1,835 people, split evenly between the genders.

Specifically, when men with stay-at-home wives were asked whether men alone should be responsible for providing household income, 57% of them said yes. That bias likely carries over into their interactions in the workplace.

Further, gendered behaviors have become mainstream with terms like “manterrupting” (women being interrupted or having their ideas shot down or taken by men) making their way into everyday language.

What’s the solution?
Approaching the issue from several different angles:

But mostly, it will just take time. After spending the past 10 years teaching PR classes to young men and women, I am very hopeful about the future. More than any generation before them, today’s young people (especially the men) appear to be much more accepting and open to women in leadership roles. They appear to be less threatened by “alpha females” and to carry less bias toward women in general. Or maybe they just feel outnumbered because they’re in the minority. 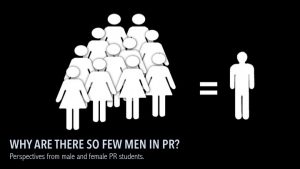 In 2012, Pennsylvania State PR student Alexis Morgan wrote an article, “Why are there so few male students in PR classes?” for Lawrence Ragan Communications, Inc.’s PRDaily.com. Her professors offered the following explanations.

“PR is more of a conservative field, while advertising is more relaxed,” Manuel observed. He believes men are more attracted to the casual advertising environment than the fast-paced PR world,” said Steve Manuel, adding, “Women are seen as more sensitive, more approachable, and as being better listeners than men.”

However, Manuel explained that men continue to dominate the upper echelons of PR due to the glass ceiling, also citing the significant salary inequality between the sexes.

Penn State Professor Ann Major Major noted the decrease in males during her 30-year teaching career. “During the last few years, only one or two males are enrolled in my senior-level courses, and I taught a class last fall with all-female enrollment,” Major said. “When I started teaching at Penn State in 1995, typically 30 percent of the students enrolled in my classes were male.”

Major attributed the decline of male students in part to the increase in women enrolling in colleges nationally. But she echoed Manuel’s observation about the lack of women in upper management.

“Women are prevalent in the profession at entry-level and junior-level positions,” Major said. “However, from mid-level to upper-level management positions, men still dominate the profession.”

Knowing I was a PR instructor at the University of Illinois at Urbana-Champaign, then-PR Daily writer/editor Matt Wilson asked if I would like to write a response to Morgan’s article.

To prepare, I surveyed my students about why they chose a PR class, what they found intriguing about PR, what skills they might bring to a PR career and what they might NOT like about a PR career. Here’s what they said:

“The conflict. I like the idea of getting the juicy tidbits on people and having the power to make or break people.”

“I think that it would be a great career to be the leveling force of a company and be trusted as the moral compass.”

“PR is used to manipulate public opinion from behind the scenes and not letting the public know you are trying to manipulate their opinions.” (Note: we had watched “Thank You For Smoking” the previous week so their perceptions may have been tainted by this “mocumentary.”)

I also conducted a focus group with 15 students to ask their perceptions about men’s and women’s motivations for pursuing careers in PR. Here are the results:

“There are more jobs in fields tailored to women more than men. I’d like to do sports PR. Women have more choices within the field.”—Alex (male)

“Men seem to avoid confrontation, and PR is very confrontational. You can’t be afraid to start fights or dive into a fight.”—Janelle (female)

“Men are confrontational, but do it in less strategic ways.”—Anonymous (female)

“Empathy is the big thing; that’s why there are so few women in engineering.”—Anonymous (female)

“The writing part doesn’t excite me as much as meeting objectives and pretty much everything else aside from writing. I mean once you get in the upper levels. It’s about manipulation, strategy, and gamesmanship. To get in is hard, and then I have to work my way up.”—Alex (male)

My informal, non-scientific research revealed that the guys’ motivations were based largely on the desire for power, excitement and responsibility.

This may at least partially explain why, although women make up about 70% of the PR workforce, they only hold about 30% of the industry’s top positions according to The Holmes Report (http://www.holmesreport.com/long-reads/article/why-aren’t-there-more-female-ceos-in-pr). Further, only 30% of CEOs in leading PR firms are women (http://everything-pr.com/women-public-relations/).

If you’re wondering why, catch next Monday’s Marketing Momentum.

Olson is a veteran marketing and public relations consultant and practitioner, freelance writer,  former college professor, principal of Katrina Olson Strategic Communications (KatrinaOlson.com), and a regular contributor to TED Magazine’s print and online editions. Katrina has worked in marketing for the retail, service, publishing, healthcare, financial services, automotive and electrical distribution industries in addition to running her own marketing communication agency and consultancy for more than 20 years. She has 39 local, regional and national awards for her work. Katrina can be reached at Katrina@katrinaolson.com.